When the nearest market is over a mile away and the price of housing is rising faster than most can keep up with, that’s the issue currently facing the community of Meadowview.

Discovering the Gift of Grocery service at New Hope Community Church this week was an enlightening experience. Pastor Daniel Wong’s efforts to provide groceries to his neighbors reflected a passion for helping people wherever they are in life – and an ongoing issue in a diverse city.

Access to food in low-income communities reflects issues that, clearly, aren’t leaving these communities anytime soon. In this neighborhood, residents can find themselves miles away from fresh food. When your closest grocery store is out by the freeway, you may often end up relying on liquor stores for basic grocery runs. On my way to New Hope Community Church, I noticed mostly gas stations, fast food restaurants and liquor stores – while the organic market was clearly off in the distance.

Knowing the situation of the area, I was struck by this man’s efforts to provide a resource to his neighbors. While he did not grow up in a household that suffered from food insecurity, he had a father who taught at their church and led his own food ministry. This upbringing was part of what brought him to this journey. He has deeply held convictions about helping people in need.

He was frank about some parts of providing food to people. It can seem disconcerting to hear about people complaining about the kind of free bread being provided, but it is also refreshing to hear the less heartwarming side of volunteering.

Wong also spoke with joy and surprise when he recalled the story of a couple who had been using the food ministry before finding jobs. It was a beautiful thing to hear about the value of food resources to people, and to hear an example of how this kind of service to others can have huge, visible effects.

Wong expressed his hope that the program is a temporary help to people, but that it will be here for people who might need it long-term, such as senior citizens living on fixed incomes. As a full-time student supporting myself, there have been times when I know I might have turned to a service like this. That’s the reality facing not only cities in a homeless crisis like Sacramento, but more towns in California than ever before.

In our conversation, Wong was hopeful that conditions for the community will improve. For the time being, it’s definite from what I saw at the distribution that there are many who are thankful that this service exists.

At one, the doors are thrown open
Welcoming the sun, and a line
of neighbors
Shuffling up the sidewalk –
“How are you doin’?”
“What’re you looking for?”
“I don’t care, alright, what’s there.”
Some are holding small hands tight,
Some whisper
To husbands, to hurry along, quickly now.

The reverend’s voice booms around the walls
as they file in
Finding empty spots on purple chairs- “what’s
your number?”
Eyes scanning piles of tortillas, the mounds
Of bread waiting
Green and white cups of yogurt, half-gallons
of orange juice – they’re running low
On the grapefruit
Not a spot on the eggs, though
And not enough cans of soup
To make it through the day

And their fingers sift through piles, of
red, bruising bell peppers
Blue and red buckets of apples
The color of a slice of wet
cucumber
And fading green, the shades of iceberg lettuce heads,
quickly fading in
the heat.

As she reaches for the biggest peppers,
The least spotted of green apples,
Her skirt is tugged by a flustered daughter, eyes wide
at so many pastries
wrapped tight in cellophane
The mother shakes her head, pushes the small hand aside
And pushes her cart,filled to the brim
Out into the sun.

I feel I ought to be able
By now
To taste the peppers, juicy and flushed red
In the sun
Just as well as the limp ones, tossed
into a wrinkled box, their flesh
Wet on the cardboard
Bleeding into their seeds
While the flies gather. 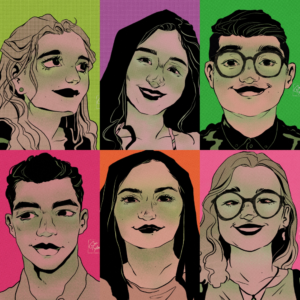