I’ve always been passionate about arts and culture in the realm of storytelling, so when I saw these murals, I knew we had something special. I came across Shonna by happenstance, and I’m so grateful she approached me. The kind of work being done through this program is such a powerful way to engage the youth and community members of Meadowview through art and heritage.

The south Sacramento neighborhood of Meadowview made news when Stephon Clark was fatally shot by police in March, but beyond the headlines is an area rich in culture.

Shonna McDaniels, 53, is a visual artist, educator and community activist who has lived in Meadowview for nearly 50 years. Since 1996, McDaniels has dedicated her time and talents as one of the co-founders and contributing artists for the Visual Arts Development Project, where she teaches after-school art classes, conducts workshops and establishes murals throughout Meadowview and the greater Sacramento area.

McDaniels believes a difference can be made by educating her community through dynamic art experiences.

“Youth that participate in our programs, it’s very important for them to not just come and do art,” McDaniels said. “It has to be a learning experience.” 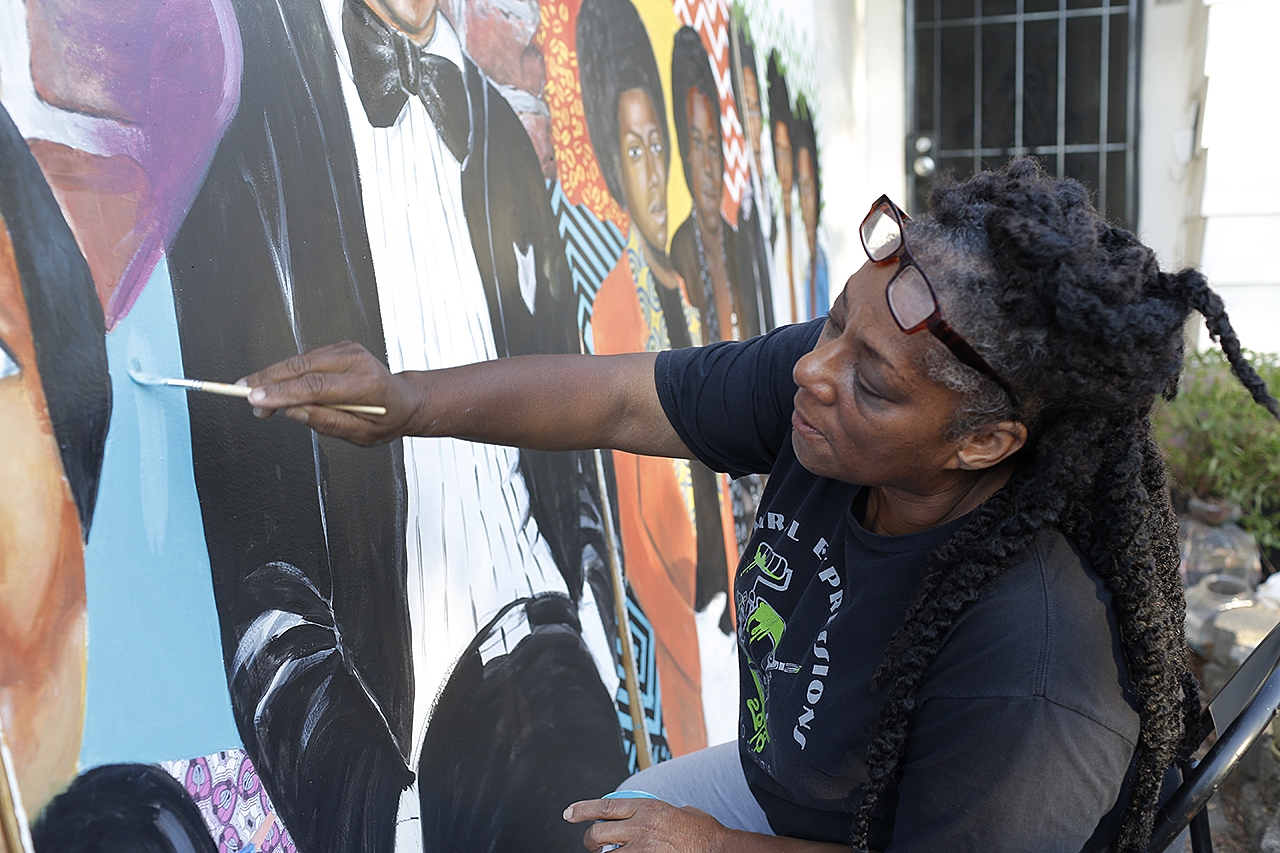 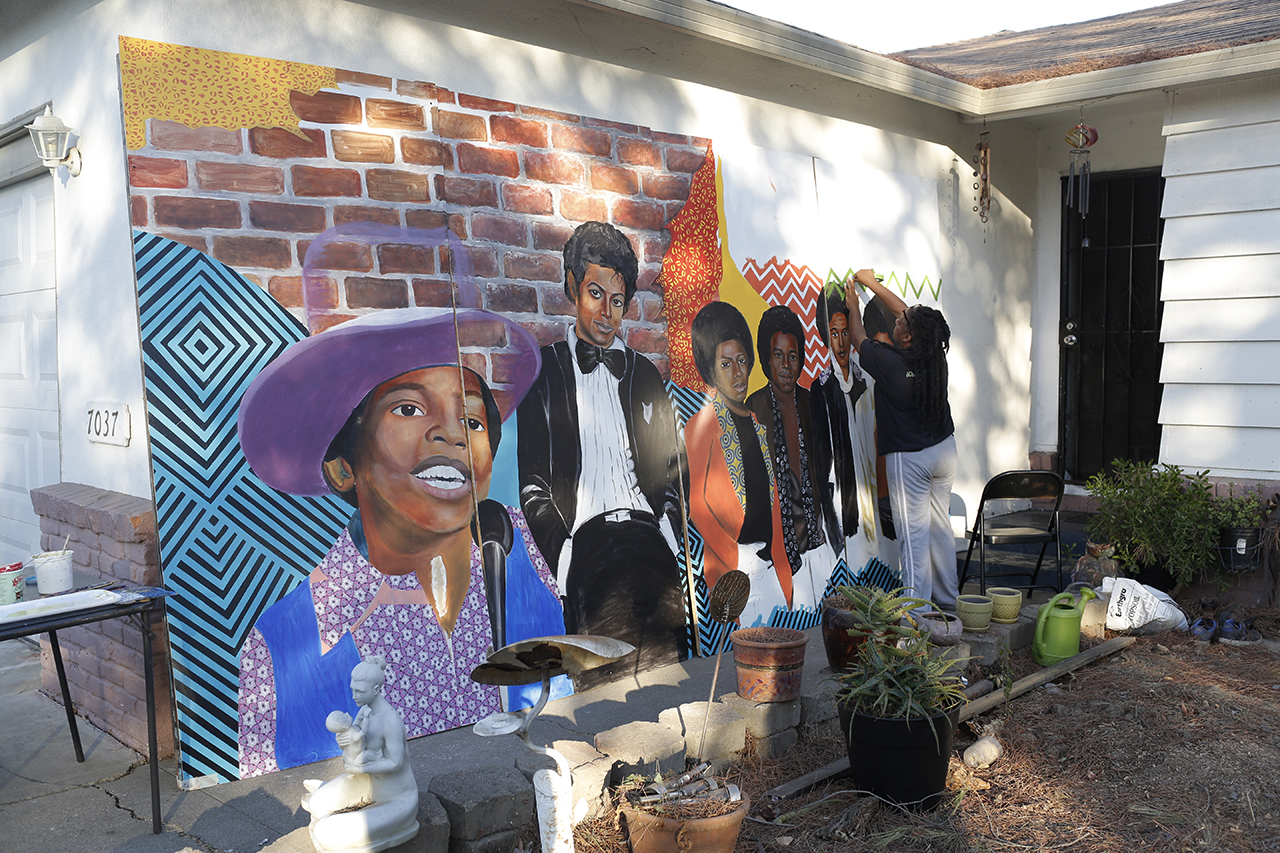 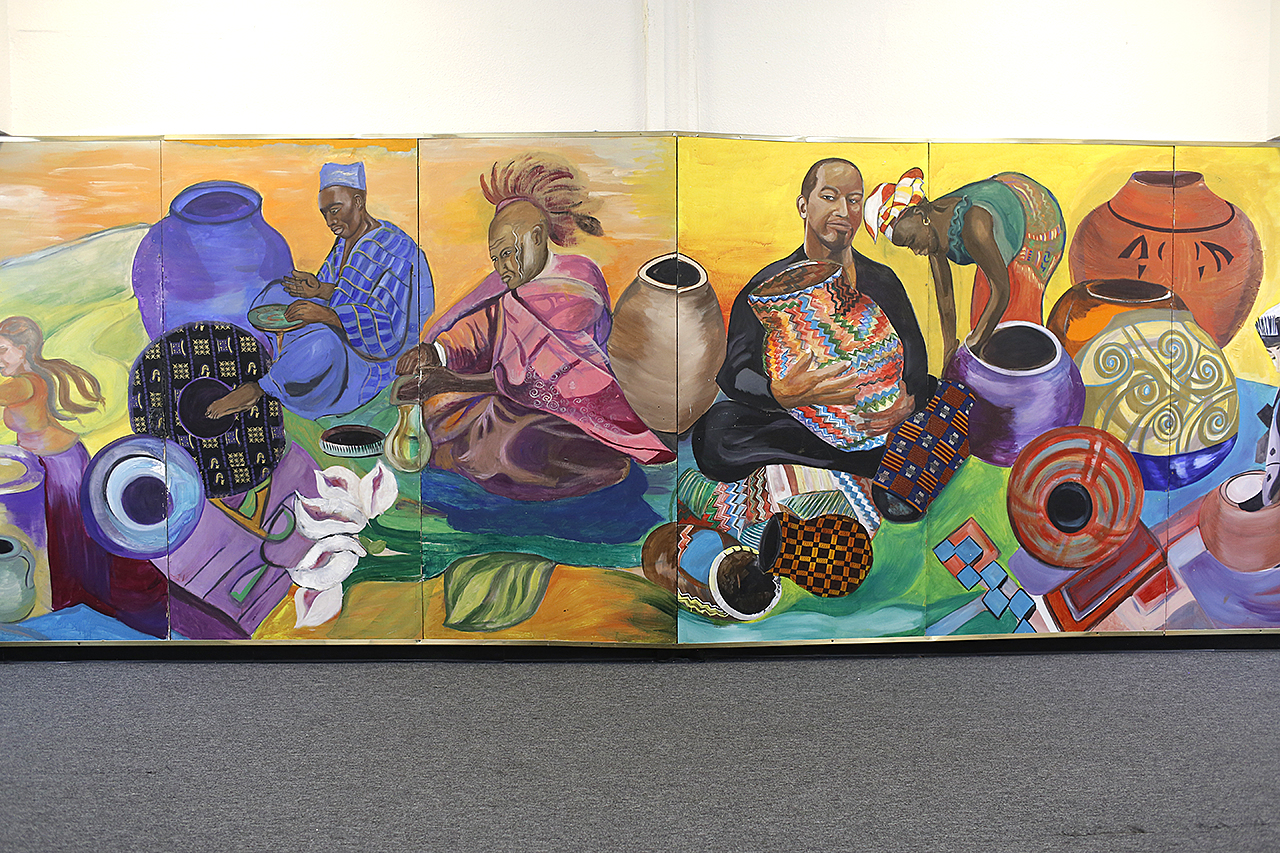 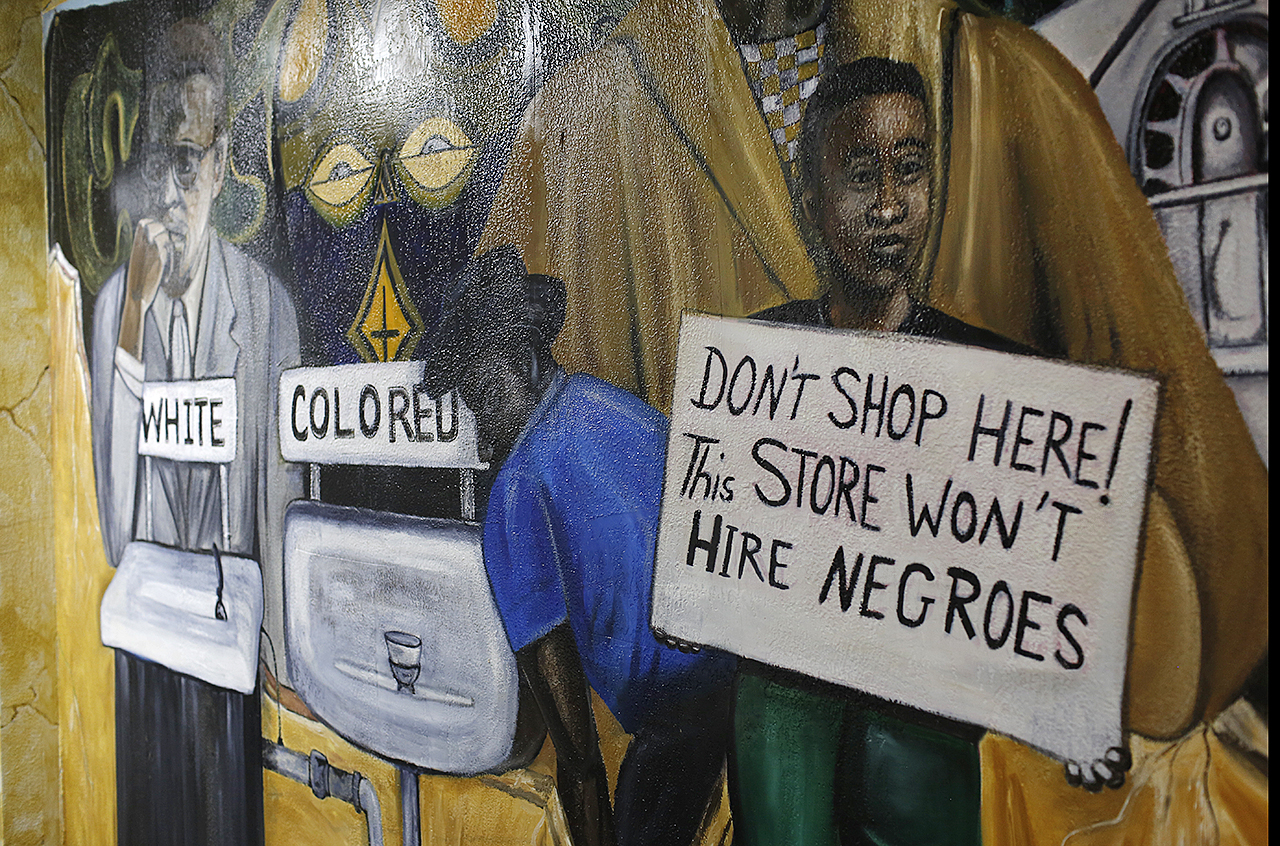 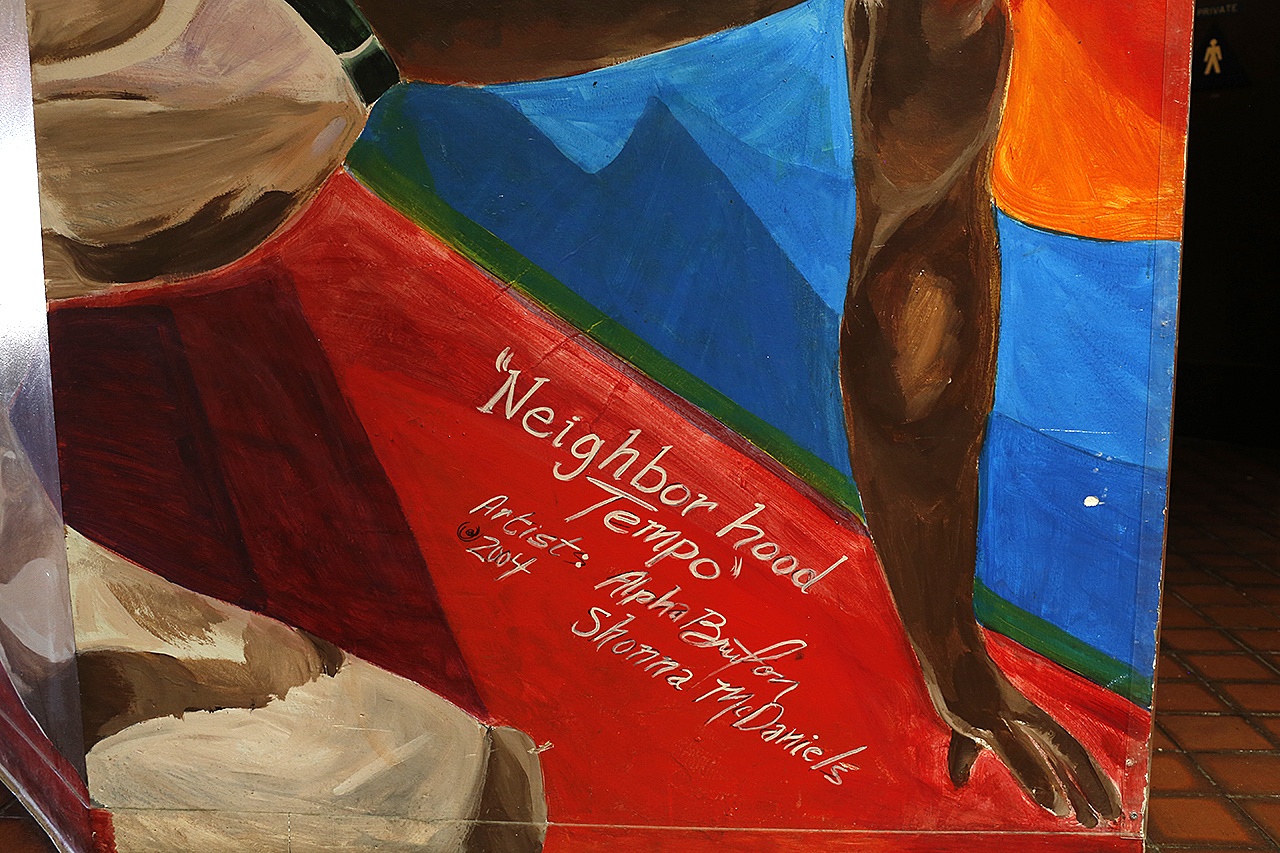 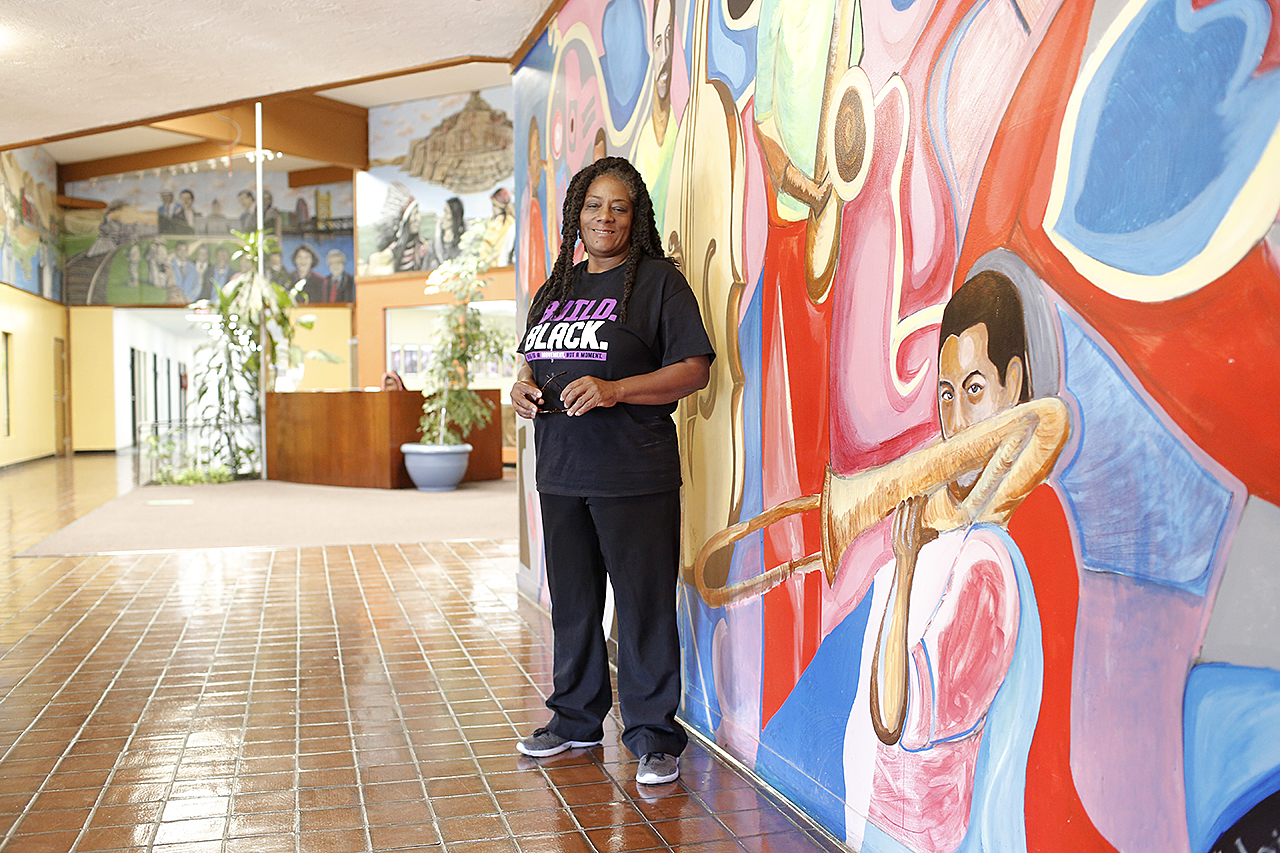 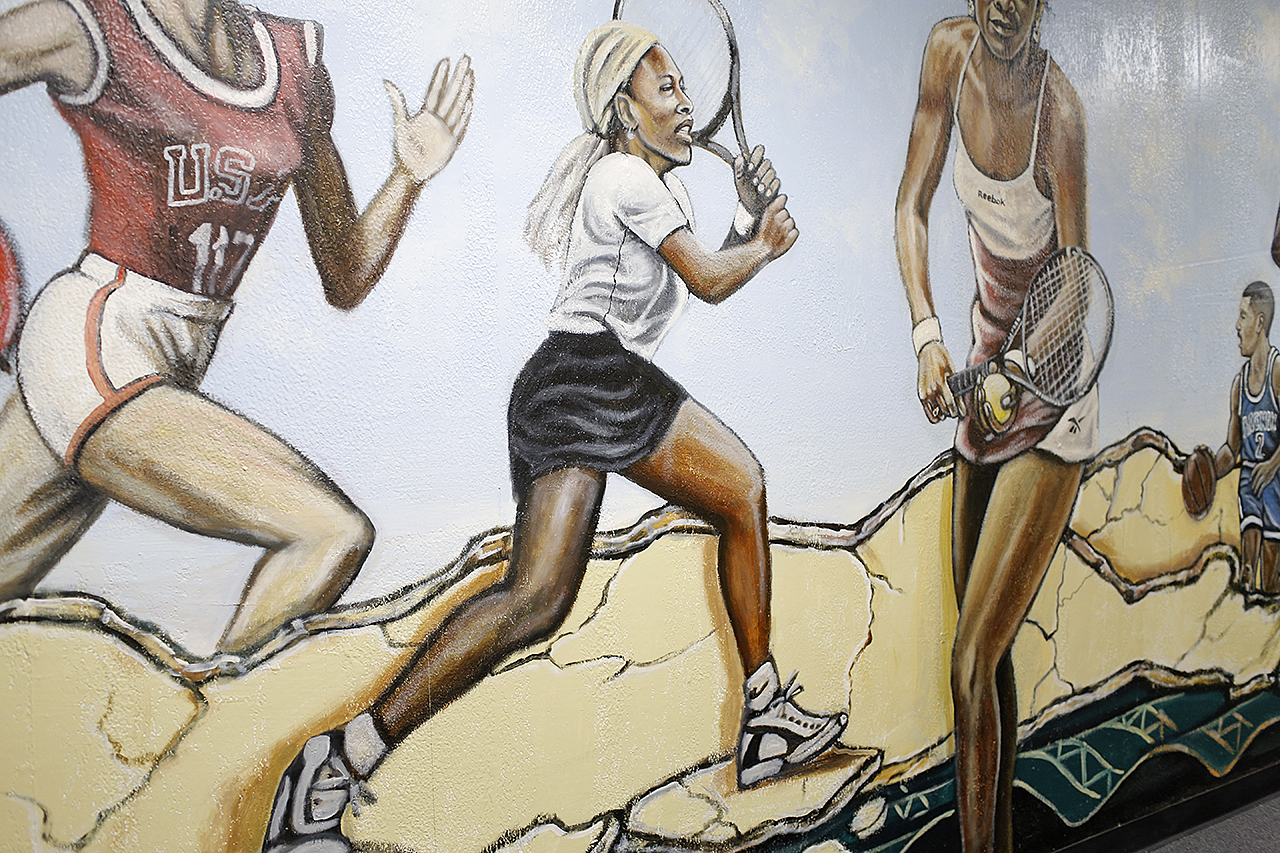 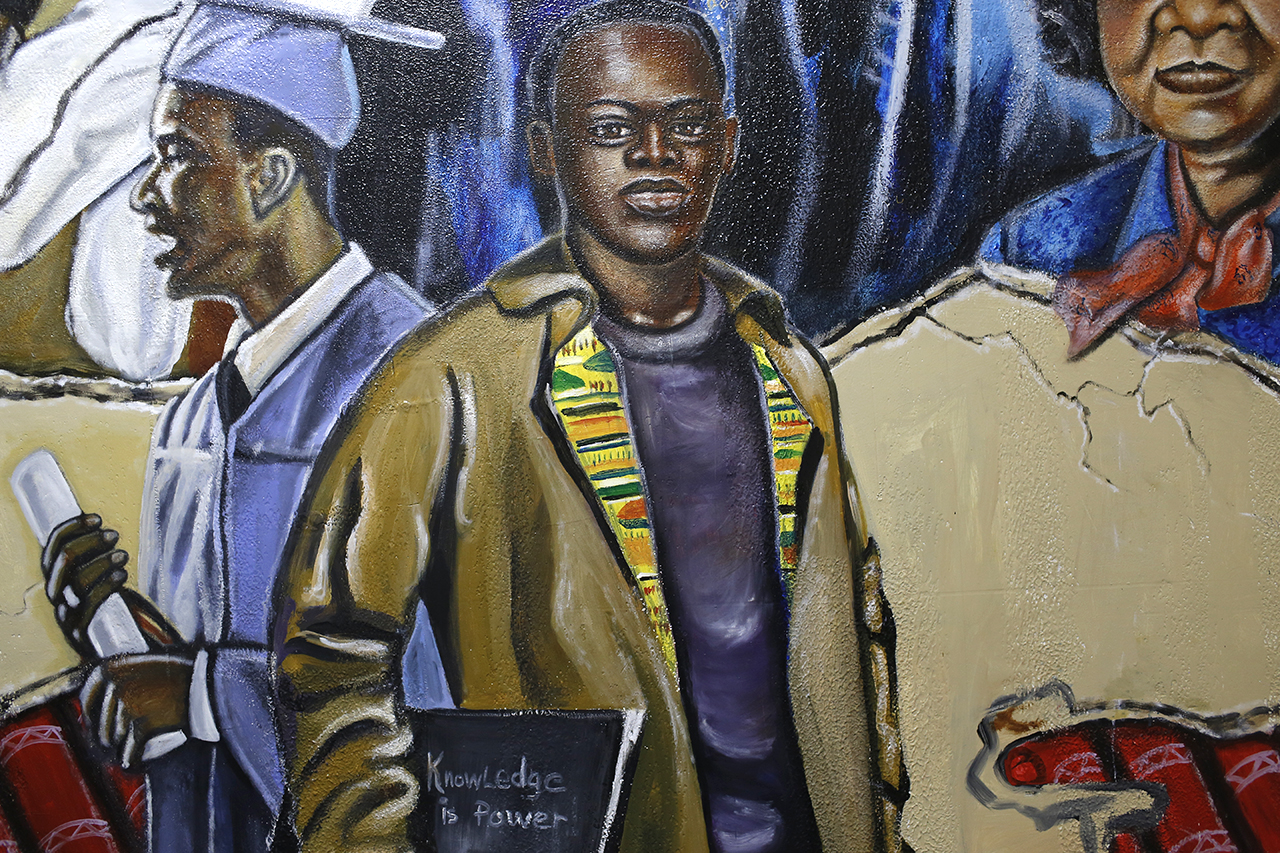 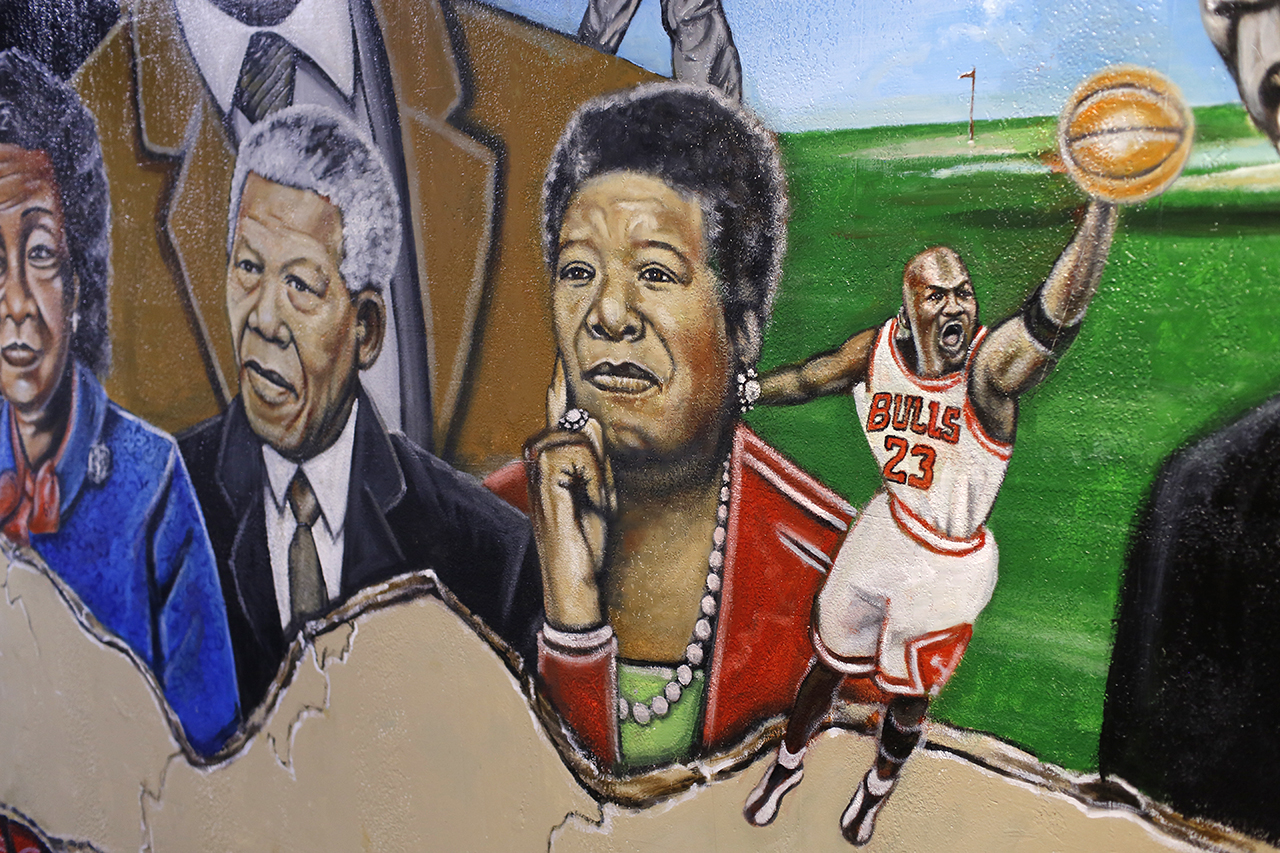 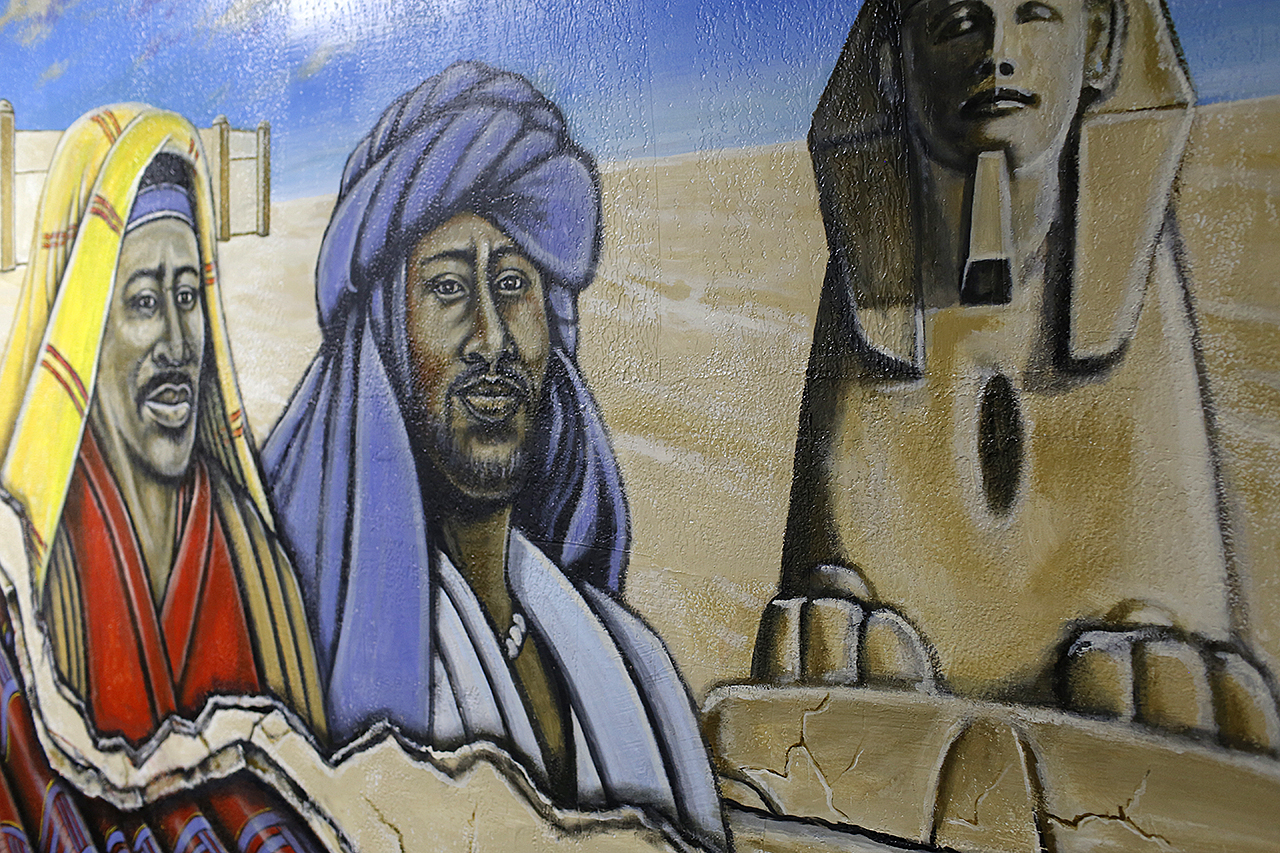 The most prominent element of the Visual Arts Development Project is the murals. The murals are abundant with color, not only through the vibrant shades of paint, but in the people of color who are represented in the work. Historic figures are prominently on display, ranging from African queens to abolitionists to Jay-Z. Walls are plastered with figures of African, Hispanic, Native American and Asian heritage. McDaniels says that representation in multicultural art is a valuable asset.

“It’s very important that youth know that African history did not start with slavery,” McDaniels said. “When they come in here, they see something different. We let them know that through acquiring knowledge and going to college, you can aspire to be men and women of greatness.”

Most of the children who walk through the halls may only be familiar with more recent figures in black history, particularly in the music industry.

“When they get to this point, it’s like a concert going on—they’re screaming, ‘There’s Jay-Z! There’s Alicia Keys!’ McDaniels said with a laugh. “We let them know that the individuals down the hallway, they helped pave the path for these individuals that you see here today.”

Other children are just excited to participate.

“In one of my classes, I had this 7-year-old girl,” McDaniels said. “She said, ‘This is my best day ever. I get the opportunity to engage in art. So her best day ever was having an opportunity to be able to create art. Can you imagine? I always ask, ‘What would the world be without the arts?’ ”

The mural program is done through the Sojourner Truth African Heritage Museum, a nonprofit organization of which McDaniels is also the founder and executive director.

The museum features artifacts and guest artwork that furthers the conversation on Sojourner Truth, the abolition of slavery and African heritage as a whole. McDaniels says her love of Sojourner Truth helped inspire her efforts to better the community.

“The work that she accomplished during her lifetime was just phenomenal — fighting for justice and equality for the slaves and for all people,” McDaniels said. “During that time, the slaves weren’t the only individuals having a rough time. White women were having a difficult time, so she fought for humanity.”

The museum is just one of many African-American-owned-and-operated businesses and nonprofits at the Florin Business Arts Complex, where many of the murals are displayed.

McDaniels and fellow artist Daphne Burgess are working on a mural featuring the legacy of the King of Pop himself, Michael Jackson. McDaniels wants to emphasize the importance of being comfortable in one’s own skin.

She paused to apply a fresh, bright coat of turquoise to part of the mural, which she expected to be completed in roughly a week.

On top of supporting the mural program, the museum partners with the Met Sacramento High, where students can come in to showcase their knowledge on multicultural history. High schoolers are encouraged to also volunteer at the museum, giving tours of the murals and answering questions about Sojourner Truth and the abolitionist movement.

More information on the Sojourner Truth African Heritage Museum can be found at sojoartsmuseum.org. 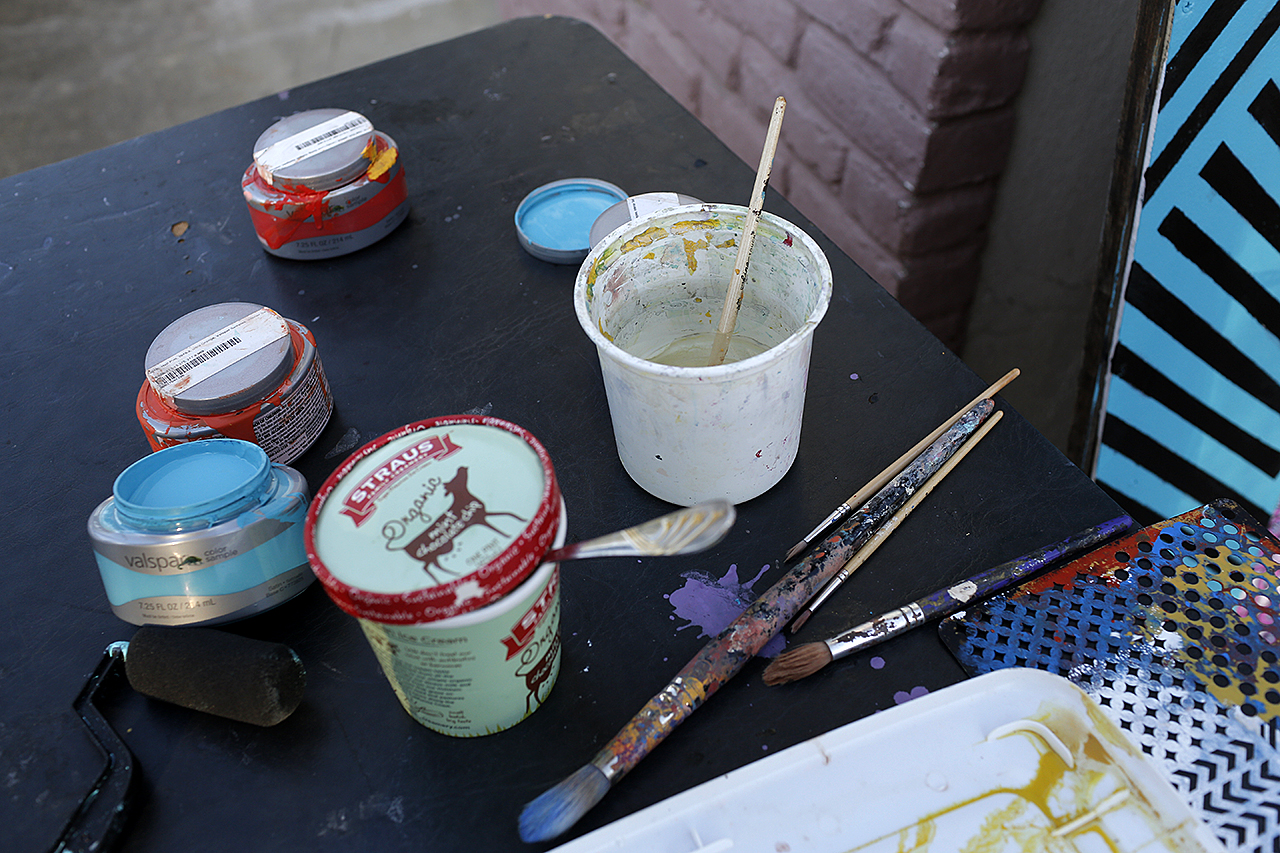 Paint, stencils and brushes are laid out and ready for McDaniels to use. (Donald Orr/Next Generation Radio) 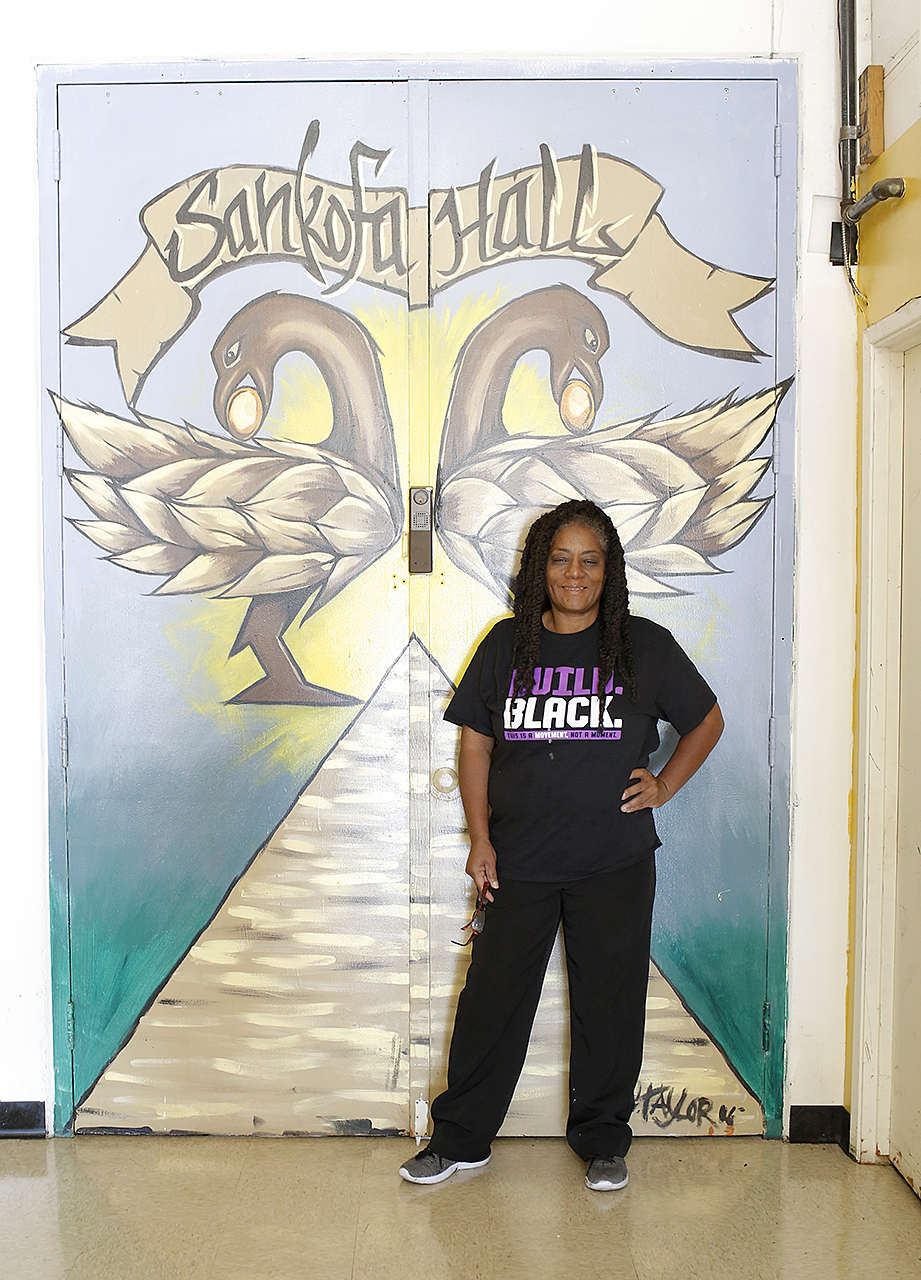 Shonna McDaniels stands in front of her favorite mural, “Sankofa,” inside the Florin Arts and Business Complex. McDaniels states that the imagery represents the need to reflect back on one’s past and appreciate it in order to move forward into a more vibrant future. (Donald Orr/Next Generation Radio) 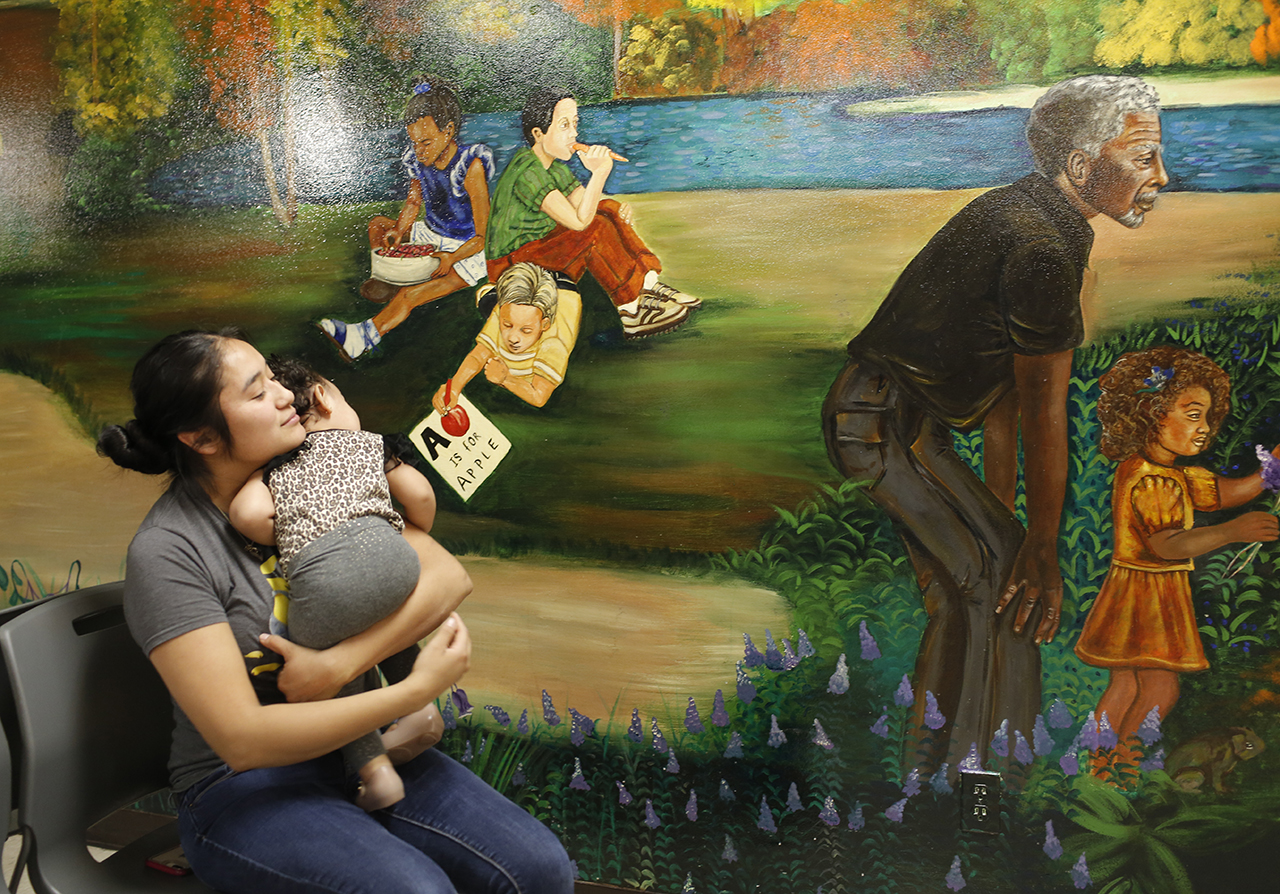 Rosa Hanoum sits in a waiting room at Women, Infants & Children (WIC) with her daughter Alayza, 1, in front of the mural, ‘WIC Park’, located inside the Florin Arts and Business Complex. (Donald Orr/Next Generation Radio)